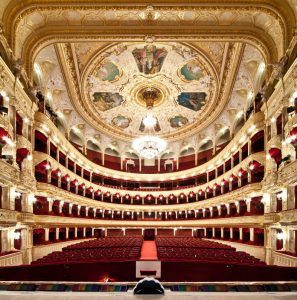 Opera has served as a reflection of cultural and society for the time period in which it was created. From the complex storylines and ornate backdrops and scenery to the beautiful structures in which it takes place, opera has a way of making society examine itself. The opera houses that present these stories are often as beautiful and complex as the production. Here are three beautiful locations to view one the most significant art forms in history.

Built in 1778, the Teatro alla Scala Opera House features four tiers with separate lodges, an ornate interior and is considered to be one of the most famous opera houses in the world. Founded under the auspices of the Empress Maria Theresa of Austria, the house was built to replace the Royal Ducal Theatre which was destroyed in the early part of 1776. The owners of the box seats at the Ducal funded the new theatre in exchange for ownership of the land and a renewal of their box seats at the new theatre.

Since the early 18th century there has been an opera house in the present location of the Royal Opera House at Covent Garden. The current theatre is the third one to exist in the space. This house is where George Handel’s operas were first performed and was also the location where the majority of his operas and oratorios were written. Today the facility aims to enrich people’s lives through opera and ballet. Two of the world’s top artistic companies-the Royal Opera and the Royal Ballet call this facility home.

The Bolshoi Theater is known to be one of the top theatres in Russia, home to one of the best orchestra’s in the world, and the home of one of the premier ballet companies as well. The structure itself has survived fire, war, and even a revolution during the time that it has been in existence. The house started out as a private theatre of Prince Pyotr Urusov. In the 1700s he was granted the job of organizing performances, masquerades, balls and other events for the venue. It has been one of the main performances venues in Russia since that time. In 2005 the house was closed in order to make extensive renovations to the interior. When it reopened in the fall of 2011, it was a beautiful, updated version of its former regal self.