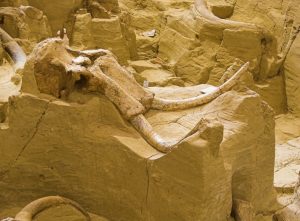 In 1974 Hot Springs, South Dakota became home to one of the greatest fossil discoveries on Earth. During a routine excavation for a new housing development, a construction crew uncovered what is now known to be the world’s largest Columbian Mammoth Site. It is believed that more than 26,000 years ago, enormous Columbian and woolly mammoths were trapped and died in this spot, which had been a spring-fed pond, near what is now known as the southwest edge of Hot Springs.

The discovery site was protected and became part of what is now a world-class museum.

The area has since been enclosed and is protected by a climate controlled building. The bones are on display and bring in visitors from around the world who come to witness the exhibit. The bones are displayed as they were discovered, in the dry pond sediments. Walkways afford guests the opportunity to get a close-up view of the fossils. Since they discovered the first bones, 61 mammoths have been identified, as well as the remains of a giant bear, camel, llama, prairie dog, fish and a number of other plant and fossils.

This site has proven to be significant in the scientific community, as it has provided a large comparative collection of mammoth remains and 26,000-year-old environmental data. The information gathered has been the basis of many exhibits, investigations, and educational programming opportunities at the Mammoth Site. This information is also studied by other major institutions around the world.

The location is open year round and offers 30 minute guided tours for visitors. After the tour is complete, guests are invited to explore the sidewalks of the dig area on their own. In addition, they can explore the many exhibits of the Ice Age Exhibit Hall and view a working paleontology laboratory on-site. There are also a number of short educational films on geology, the history of the site and early North America and the people and animals that co-existed during the Ice Ages.

Though it is open year-round the hours vary throughout the year. For additional information check out the website at mammothsite.com.