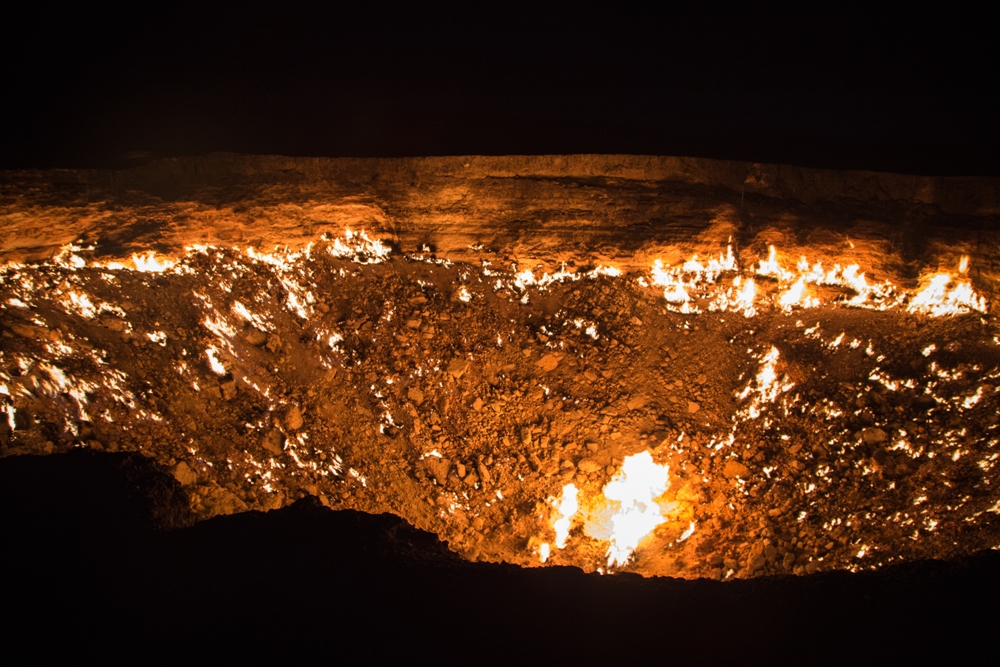 The earth is home to places both beautiful and creepy; places that have the feeling of being haunted and even places that appear as hell on the planet.

Named by locals as The Door to Hell, this is one of those places that fits in the latter description – and the sinister flames are only the beginning.

Slightly more than 150 miles from the capital of Turkmenistan in the Karakum Desert, this pit (of hell?) brings in tourists by the hundreds every year. It even attracts wildlife from the desert nearby. It has been reported that spiders have been seen all marching into the pit (numbering in the thousands!) from time to time.

So where did this inferno come from? How did it get here?

Back when Turkmenistan was still a republic and member of the Soviet Union, a group of geologists searched the Karakum Desert for oil. They believed that they had found an oil field and in 1971 proceeded to drill. In an unfortunate turn of events, they found that they were actually drilling atop a hollow, natural gas pocket, the weight of the group’s equipment it could not sustain. The dig site subsequently collapsed, and took all of the group’s equipment down into the depths, triggering collapses across the desert resulting in many open craters, the largest of which measures 230 feet by 65 feet. There were no reports of any injuries to the group, however they had another problem – natural gas was escaping this crater at record speeds. While the gas itself is not considered toxic, it displaces oxygen, making breathing more difficult. It was not a problem for the group; however, the region’s animals began to die off.

And then there was the problem of the flammability of the gas.

So the group decided that the best solution to their problem was to beat the crater at its own game. They decided to light it on fire in the hopes that the burning would cease within a few weeks’ time – but it is still burning.

The president of Turkmenistan visited the crater in 2010, stating that something must be done to cease the incessant burning, as his worry was that the country would be unable to develop gas fields in the vicinity. There has been no action taken, thus the Door to Hell burns on.