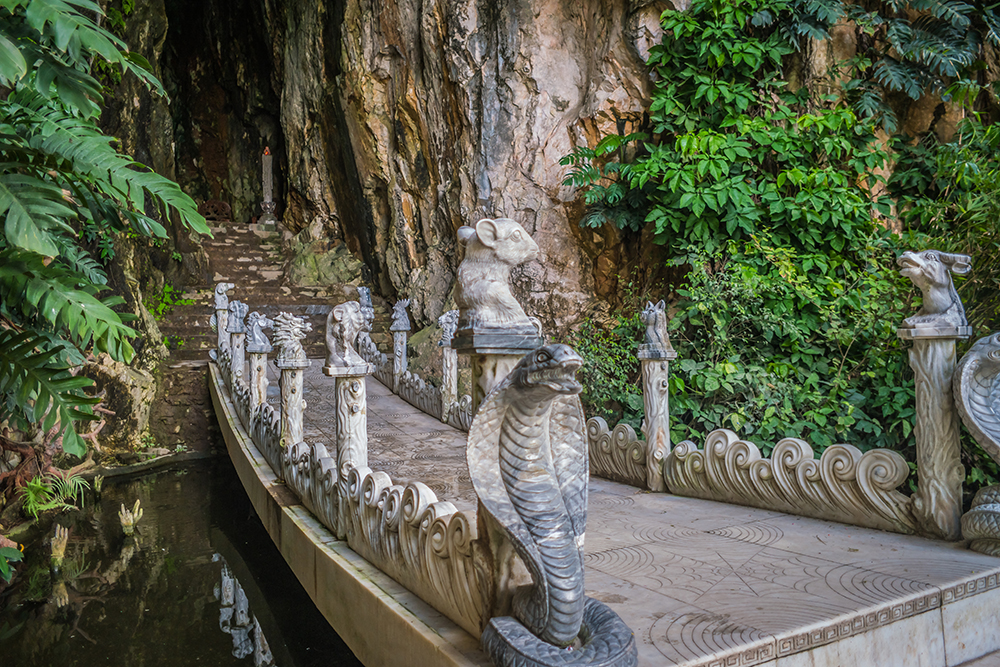 Through the years artificial and man-made religious grottoes have popped up around the United States for both ornamental and religious purposes. Often used as shrines to pray to saints or sometimes just as a space for quiet contemplation, these sacred spaces have increasingly become destination locations for the faithful.

The Grotto of Our Lady of Lourdes, University of Notre Dame

After visiting the famed French Shrine where the Virgin Mary appeared to Saint Bernadette on multiple occasions in the mid-1800s, Notre Dame founder Father Edward Sorin made a promise that he would recreate it at his new university. In the late-1800s, a gift from Rev. Thomas Carroll, a former Notre Dame student, enabled the promise to become a reality.  The space is considered a holy spot where guests and students can come for quiet contemplation or just to take a break from their day-to-day lives. A small stone from the original shrine in France rests just below the statue of Mary and is a reminder of how the Grotto came to be.

The Grotto of the Redemption, West Bend, Iowa

The story behind this unique grotto goes something like this: Father Paul Matthias Dobberstein became very ill with pneumonia when he was a young seminarian.  As he realized that the illness was reaching a critical level, he prayed to the Blessed Virgin Mary to help him and to grace him with good health. He promised that he would build a shrine in her honor if she would help him through the illness. After praying, the illness passed and he went on to be ordained. In the early 1900s, while working as a pastor in West Bend, he began to construct the grotto in order to keep his promise. The name of the grotto is meant to reflect his intent to build a shine that tells the story of man’s fall and his redemption by Christ.

The National Sanctuary of our Sorrowful Mother, Portland, Oregon

Established in 1924 by Friar Ambrose Mayer, the National Sanctuary of our Sorrowful Mother (AKA, The Grotto), was constructed as a natural cathedral to house a statue of Mary holding Jesus’s crucified body. Over the course of the next several years, a variety of other installations were added, including a recreation of Michelangelo’s Pieta, a botanical garden, and a variety of statues depicting everything from the baby Jesus to a John F. Kennedy Memorial. What was once a small shire has become a popular destination for religious travelers in the Pacific Northwest.