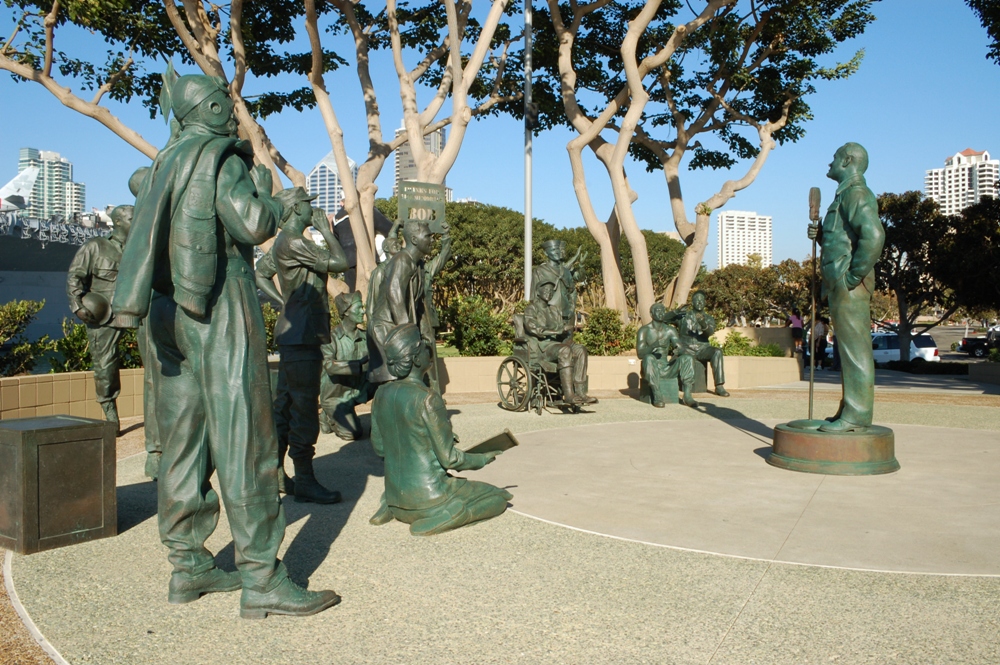 Bob Hope National Tribute – San Diego, California – Located within viewing distance of the “Unconditional Surrender” statue (a sailor kissing an unsuspecting nurse) is a tribute to the nation’s foremost people known for entertaining the troops, both at home and abroad.

What looks like a small crowd assembling to listen to a man with an old fashioned microphone turns out to be several bronze statues assembled to listen to the incomparable Bob Hope. Hope was known best for his amazing one-liner jokes that amused both troops and families watching his antics from home.

Bob Hope passed away at the incredible age of 100 in 2003. He had been performing at events for the military since the early 1940s, entertaining millions from the second World War through to the War in the Gulf.

Hope was amazing at igniting morale, and was no doubt one of the highlights of many soldiers’ tours. Former President Bill Clinton bestowed Hope with an Honorary Veteran rank in 1997.

The tribute consists of fifteen life-size bronzed statues, all arranged with Hope as the focal point, as if they are attending one of his shows. Each statue is a representation of a soldier in the various conflicts this nation has known. Perhaps the most gripping and fantastic part of this exhibit is the fact that it is completely open, which allows those visiting to wander among the statues and take photos if they choose. Some visitors simply choose to stand in the “crowd” and imagine what it would have been like to have been a serviceman hearing Hope in the midst of whatever conflict the world was in at the time.

Servicewomen are also represented in the tribute, as well as wounded veterans, and the racial diversity of the statutes reminds of a time when Hope’s appeal was broad, and dividing lines much thinner.

Two of Hope’s children were present when the sculptures were dedicated officially in July of 2009. The tribute to Hope and the military is located in Tuna Harbor Park in San Diego, and admission is free.