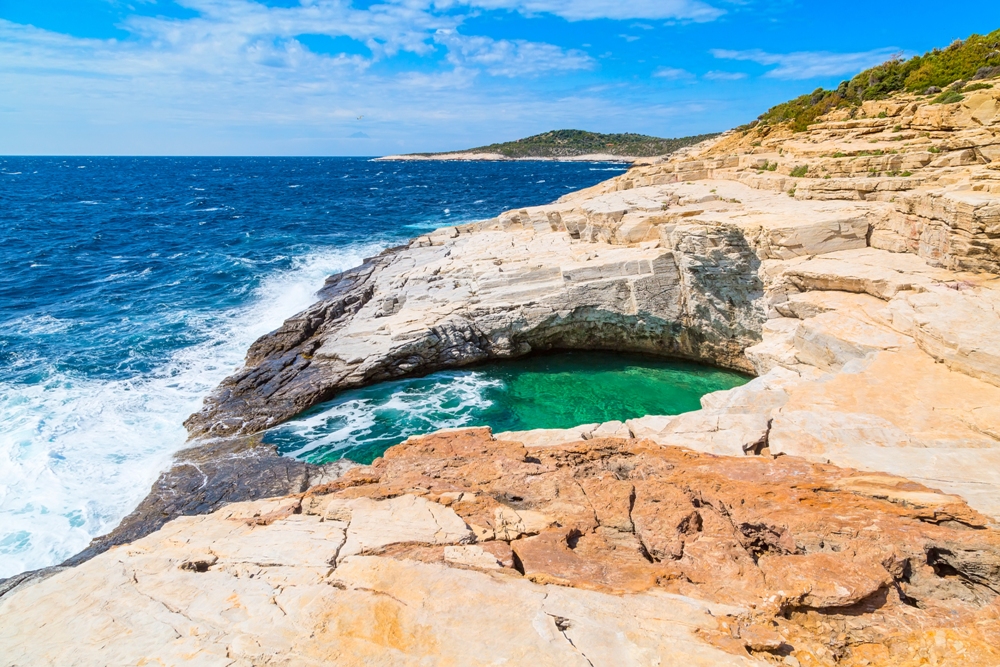 Greece’s most famous tourist destination is unequivocally the island of Thassos; however, buried within the island’s interior, much like a diamond waiting to be found, is a largely unknown lagoon called Giola. Many people don’t know of its existence, and finding it is nearly impossible without someone who has been there before as your guide.

Located in a rock formation that measures 66 feet by 50 feet, this pool of nature’s creation is located about two-and-a-half miles outside of the village of Astris. This lagoon is separated from the Aegean Sea by a thin sliver of rock. When the waves of the Aegean wash over it, it instantly refreshes the pool’s water. This constant wave action from the Aegean is what is thought to have carved this natural pool out of the stone which surrounds it.

This natural separation between the sea and the pool is what is thought to be the reason for the pool’s naturally warm waters. It is a pleasant dive indeed, and there are natural “diving boards” within the rocks from which you can dive. The highest of these is about 27 feet in the air. There are natural “steps” all around, and some portions of the stony blocks are flat, making for the perfect sunbathing area. And because this isn’t a tourist hotspot, you’ll be able to indulge in relaxation.

Aside from the natural reasons thought to have shaped this pool in the cliffs, the locals of Thassos have legends associated with the region. For instance, the pool is thought to have once been the place where mythical Sirens once lived, attracting sailors with their beautiful songs. Another legend says that Zeus created it for his love, Aphrodite, and that she swam in it often, leading to the other name for the pool, The Tear of Aphrodite. In yet another legend, they say that Zeus did not create it for Aphrodite, but rather he used it as his “eye” so that he could watch her as she bathed.

Whatever its creation story, Giola Lagoon is a must-stop place to add to your itinerary when visiting Athens and Thassos.