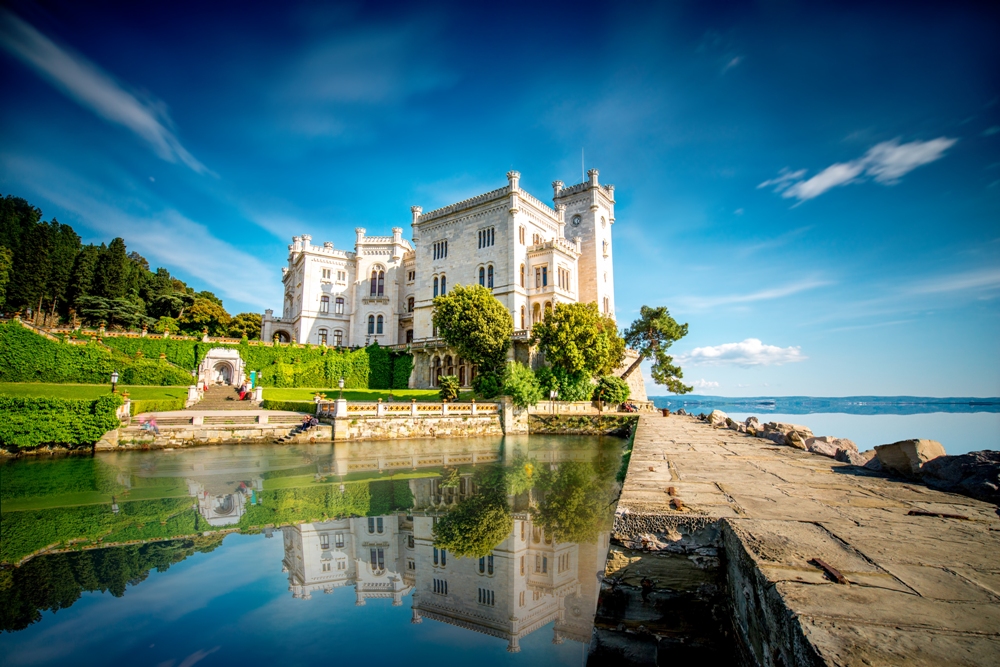 Miramare Castle in Trieste, Italy – Pride doesn’t fade with the mere passage of time. Hapsburg’s Archduke Ferdinand Maximilian felt he should have a prime residence that showcased his rank. He chose the outlying area of Trieste; a parcel that faced the ocean with a grand garden surrounding the property. The Grignano promontory, an outcropping nearly devoid of fauna, would become the Castle of Miramare and accompanying park.

Building of Miramare Castle began with the purchase of numerous plots of land in late 1855. The very first brick of the foundation was laid at the beginning of March 1856 by Austrian architect, Carl Junker. Nearly four and a half years later, Christmas Eve of 1860, Ferdinand and his wife, Charlotte, began living in the downstairs quarters which was entirely externally completed. On the inside, it was still under construction. This was of no matter to Ferdinand because, while he believed his wife deserved the best, he was also eager to point out his grand stature to anyone who would look. This not only meant the best possible location, but also the best possible furnishings.

The Archduke’s artistic inclinations are reflected by the style of the home. He was familiar with the architectural styles of the time, much of which were simply eclectic – a mixing of Renaissance, Gothic, and Medieval stylings. He desired to have the definition of a nobleman’s home: built on an Alpine landscape on the bank of a river or lake.

At Miramare, he has created the perfect combination of Mediterranean Sea scents and European austerity, making for a unique atmosphere. The distinctive color of the sea here inspired the colors of the tapestries on the castle’s ground floor, as well as inspired the furnishings in several of the castle’s rooms.

These furnishings were the responsibility of prized craftsman of the day, Franz Hofmann. Franz and his son were given the noble employment of decorating the entirety of the castle. Ferdinand and Charlotte’s floor is intimate, with a familial atmosphere, while the first floor, which was designed for guests, was meant to be awe-inspiring and was sumptuously decorated with tapestries and furnishings embellished with imperial emblems.