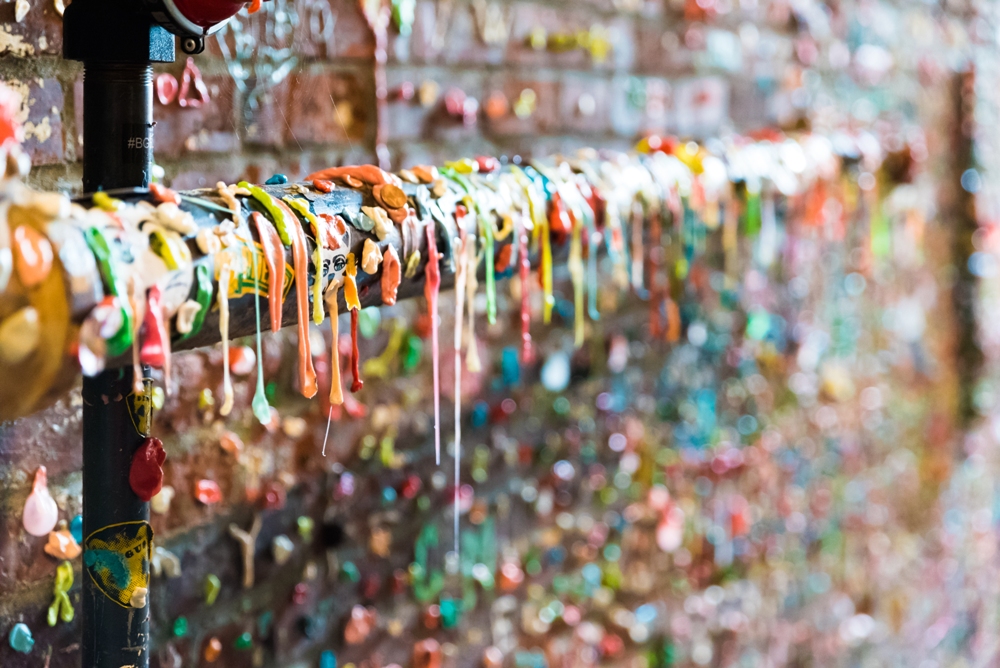 The Market Theater had humble beginnings.

In the early 20th Century, the theater was actually a horse barn belonging to the founders of Pike Place Market. They would stable their horses there during their workday, much like today’s workers park their cars. It wasn’t until 1977 that the stable was converted into a posh movie theater, complete with seats and carpeting that had come from the lobby of the world-famous Radio City Music Hall.

It closed as a movie theater in 1989. Two years later, a non-profit improvisational theater troupe re-opened the doors as the stage for Unexpected Productions.

The Market Theater had a strict “no gum” policy, and patrons of the establishment took it seriously. In the early part of the 90s, show-goers took their gum out of their mouths before entering the building – affixing it to the outside wall of the theater instead.

People starting visiting the theater, not so much to catch a show, but to have their moment in a spotlight of sorts, just to stick their chewed gum on this wall. Early on, the practice was discouraged by frequent cleaning of the wall; however, people simply replaced the old gum with new gum. In 1999, The Gum Wall became officially a Seattle attraction.

Because the theater doesn’t clean the wall as often anymore, sometimes the gum can grow to many inches thick in certain spots. The wall itself is more than fifty feet long and people reach up as high as fifteen feet to place their gum. Apparently, some visitors bring a ladder.

The smell of sugar and mint will hit you long before you round the corner onto Post Alley. Those who are there for the sheer novelty of it simply affix their gum to mark their place on the Gum Wall’s timeline; however, others adorn their rubbery gobs with a coin or a business card. What a way to get publicity, right?

In 2015, even though it happens rather regularly, a lot of heat came about when the wall was steam cleaned, taking off more than a ton of gummy residue. It was explained that this must be done in order to help slow the deterioration of these bricks due to the sugar content in the gum.

You’ll find this wall of gum at 1530 Post Alley in downtown Seattle.