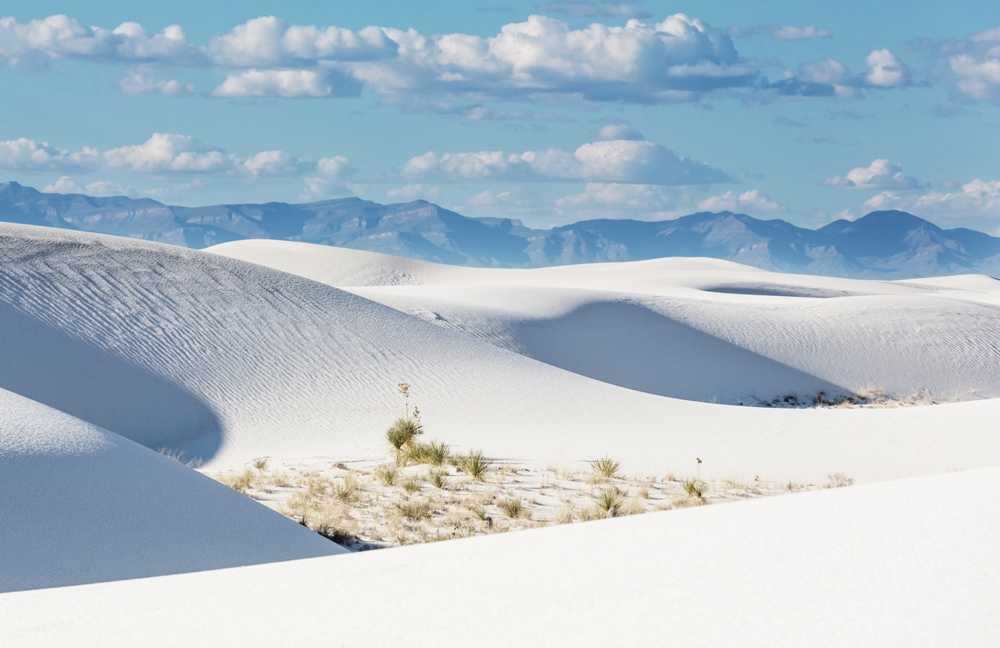 Photographs of White Sands look more like a wonderland of snow, but the “white stuff” is really white gypsum crystals. Unlike snow, it never melts away, and unlike the most beautiful of white, sandy beaches, this “sand” never gets hot, even though temps in the region can be more than 100 degrees on a summer day. It’s important during your visit not to depart from the trails that have been marked and to ensure that you have brought enough water. Visitors that have wandered off on their own or who forgot their water have perished due to dehydration or sunstroke. In fact, sunglasses are a must as well.

Most national parks workers are extremely reserved and down to earth; however, those at White Sands encourage visitors to get goofy with the environment – it adds to the fun. At the White Sands Visitor Center, you can buy a saucer to sled the dunes. And if you’re a photographer looking to snap pics of another planet, there is no better place to take a selfie with the caption, “Don’t try to reach me; I am on vacation on Europa. Yes, they have internet.”

While the majority of White Sands is utilized by the United States government for missile testing, a small section has been reserved for tourists. It might not seem fair, but this is essentially a great aspect of why this park is so fantastic – it’s easy to find, there’s only one way in or out, and distances between portions of the park (like the parking lot and the dunes themselves) are relatively short. In short, you can take selfies on Europa and be in Alamogordo having dinner less than thirty minutes later.

The park does close down during rocket and missile testing, and while it is okay for you to take a small bit of the white stuff home with you, the rangers do ask that you not pick up anything that is metallic in nature. Souvenirs can be bought at the Visitor’s Center. Park hours are 7 am to 9 pm during the summer, but are shorter during the off-season, so calling ahead is suggested at 575.479.6124. Admission is $5 per person