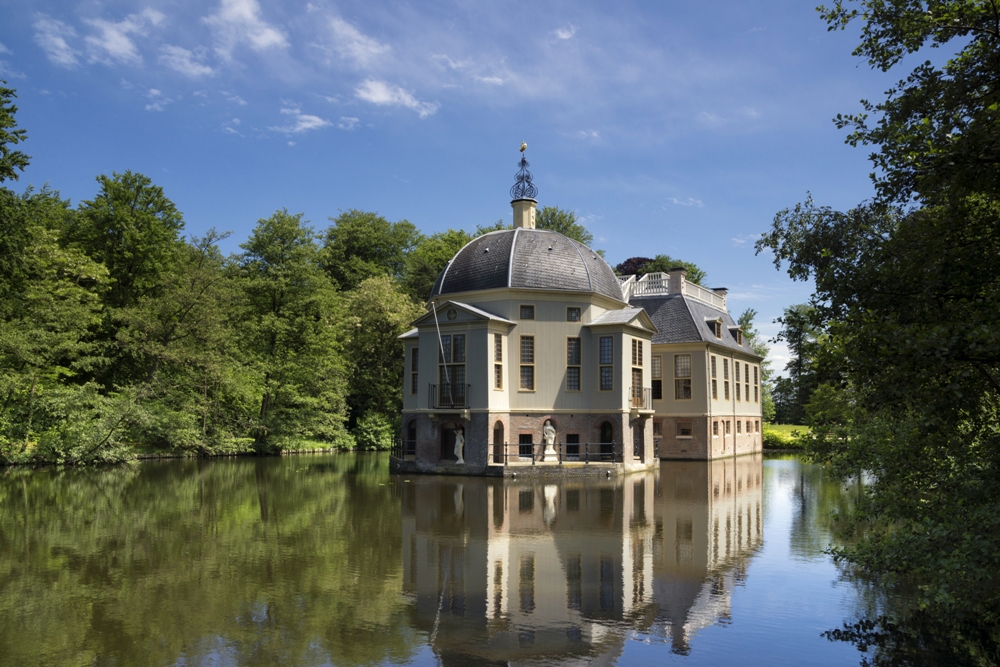 Situated between the valleys of Vecht and the mountains of Het Gooi and named after Cornelius Tromp, a seafarer of illustrious career, lies Trompenburgh Estate. The original mansion was first opened in 1654, but after a horrible destruction of the home, Tromp left in 1673. At the time, the estate was known as Syllisburg, derived from a title that Tromp had been bestowed by the Danish king. It is believed that Trompenburgh’s design was borrowed by Tromp from another home he greatly admired, Huis ten Bosch.

Cornelius Tromp passed away in 1691, and his surviving family rented the estate for several years. When Jacob Roeters purchased the property in the early 1700s, he changed the name from Syllisburg to Trompenburgh to pay homage to the home’s creator. Via Roeters’ surviving descendants, the property was extended and transformed into a beautiful estate complete with park and gardens. Over the next few hundred years, several more modifications were made – to illustrate modernity at the time while keeping to the original designs as much as possible. F. E. Blaauw was the last private individual to own Trompenburgh, and when he passed away he left the entire estate to The Netherlands.

Tromp himself is responsible for the geometric patterns of the landscape. When he designed the grounds, his geometric patterns were well ahead of their time. Many of the original structures from Tromp’s day are still present, as are various plots that were for distinct uses. One of the most prominent features of the Trompenburgh Estate is that of the interconnectedness between the landscaping and its features with that of the home. Particularly worth mentioning are the various lines of sight provided at different vantage points along the property and from various windows within the home.

The estate is now well-preserved by the state of The Netherlands. The home and grounds are open most days, but calling ahead for days and times, as well as current admission prices, is pertinent. On the Netherland’s holiday known as The Day of the Castle, Trompenburgh Estate is open to the public from noon to 4:30 at absolutely no charge.