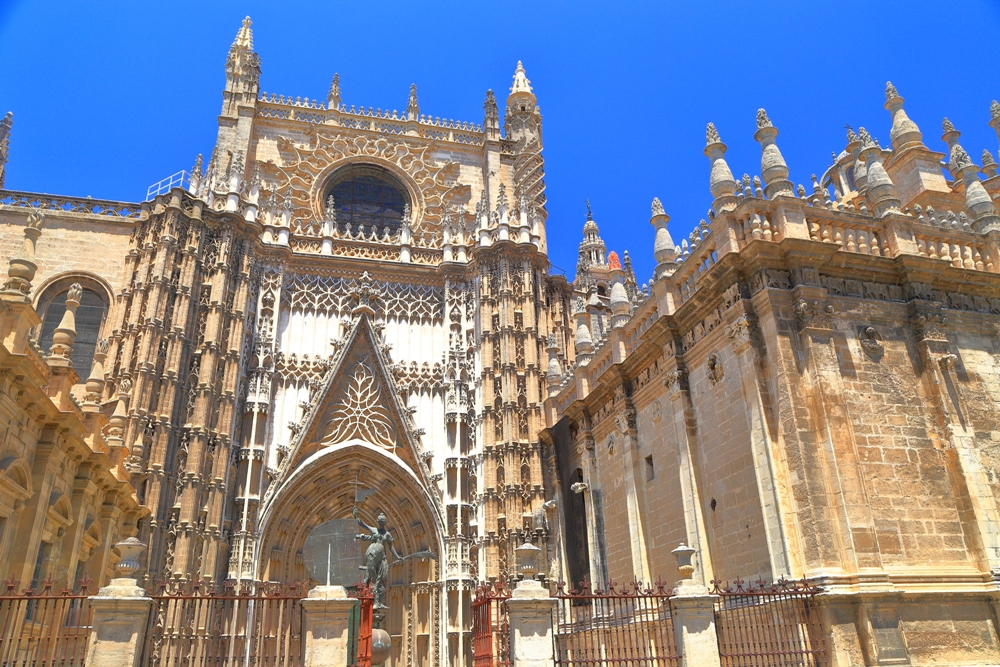 Visit Seville Cathedral’s La Giralda in Sevilla, Spain – When Seville cathedral was built, designers utilized the spire of the mosque the cathedral was replacing to pay homage to the peoples that had come before. This spired tower was known as La Giralda.

The tower was built over a twelve-year period in the late 12th century using the Almohad style of architecture. It is thought to be the finest example of Almohad architecture, and the best out of the three towers built in the style. The other Almohad towers are in Rabat and in Marrakesh.

The top of the spire was adorned with four spheres made of copper that were visible for miles. It was used both as a means for calling people to prayer time, as well as for a city observatory.

The Moorish peoples despised La Giralda so much that they were bent on its destruction long before the Christians conquered the city in the mid-13th century. King Alfonso X prevented its destruction, however, with the simple warning that should even one stone be removed that those responsible would be put to death. Being thus preserved, La Giralda went on to become the Christian Cathedral’s bell tower in 1402.

Throughout the Renaissance age, many renovations were made. The earthquake of 1356 destroyed the tower’s original spheres of copper. A belfry was added, giving four more levels to the top of the tower, which was adorned with a bronze statue of Faith. This period also saw the addition of balconies.

Part of the spectacle of the tower is how its beauty is so simple – the shadows that form when the light pervades the trelliswork, which is different all the way around, is reminiscent of the inner workings of a children’s music box. While many say that the additions to the tower performed during the Renaissance age took away from the tower’s beauty, it is still considered one of Islam’s most incredible monuments.

To reach the tower’s entrance, you’ll go inside Seville Cathedral. There is no extra charge to visit the tower; it is included in your admission to the cathedral.